'Termination' simply means 'coming to an end'. So this section is all about how your job can come to an end.

There are 4 main ways that you need to know about. Let's have a gander.... 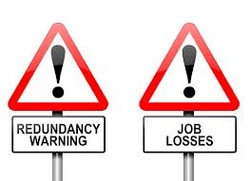 People can only be made redundant if their job is no longer needed in the company. So, put simply, if the job disappears, or a company goes bust, it is ok to make somebody redundant.

For example, if McDonalds decided that they didn't need a cleaner anymore, they could make the cleaner redundant. If the cleaner had worked there at least 2 years, they would  receive a redundancy payment to help towards the costs of being out of work and finding a new job. It's not much though - only around one week's pay for every year that you've worked there!

It is NOT ok to make the cleaner redundant, however, and then advertise for a new cleaner the week later. If that happened, McDonald's would really have sacked the cleaner and they can't sack somebody unless they have a good reason....more on this later!

People can retire from their jobs in the UK and claim their State (Government) Pension. At the moment, men can do this when they are 65 and women can retire when they are 60. That's going to change by the time you're old though - everyone will have to be at least 67 before they can retire - this is because people are living longer and the government can't afford to pay the pensions to people from the earlier ages.

Some people pay into a Private Pension while they are working. If they do, and they have paid enough in to their pension, they might be able to stop working before their retirement age. These people are known as 'proper lucky'!

If I was late to work tomorrow, my boss would look at her watch and tut sarcastically at me! If I was late every day next week, she'd probably have a chat with me about being on time. She couldn't sack me though.

Less serious things, like being late, or not wearing the correct uniform, are known as Minor Misconduct issues. The boss cannot dismiss somebody for this, but she can if she gives out warnings and nothing improves.

Some big things though can get you sacked (dismissed) on the spot. These things are known as Gross Misconduct issues and include things like:
If you carry out any of the above, you could be instantly dismissed and marched off the premises!

If you feel that you have been unfairly dismissed though, you could speak with your union (if you are in one) or you could take the company to an Industrial Tribunal. This is like a business Court, where a decision would be made about whether you should be allowed your job back.

Sometimes, you just want to leave your job. It might be that you have won the lottery and don't need to work anymore! Or it will probably be that you have found a job somewhere else, maybe on more money.

If this happens, you need to resign from the company, normally by putting it in writing that you want to leave. You will have to work a 'notice period' for the company that you are leaving, which can range from one day to one year, depending on what it says in your contract.

'Working your notice' gives the company time to find somebody new to take over your job. It also means that you'll leave the company on good terms - this is important as you might need a reference from them in the future!
Human Resource Management