The European Union helps make trading between member countries much easier. For your exam, you'd be expected to know briefly how the EU works, why it exists and what the advantages & disadvantages are.

The first thing to bear in mind though is that a country can only be in the European Union if it is in Europe!

Countries in the European Union have to obey EU Laws, such as their Health & Safety Laws and their Employment Rights laws, which includes having a fair minimum wage. If a country wants to join the EU and it's own laws are not up to scratch, the EU can refuse that country membership.

If a company is not in an EU country, our government can stop other countries products being sold in the UK, or they can restrict the amount that they let in. This restriction on the quantity is called a Quota.

Alternatively, if a company is not in an EU country, our government can charge a tax on every tin of corned beef brought in (or whatever product is trying to be sold). This tax makes the Argentina Corned Beef more expensive, so people in the UK will hopefully still buy the British Corned Beef. This tax is called a Tariff.

The key thing about the European Union is that there are NO tariffs or Quotas for companies trading with each other, providing they are both in EU Countries. So, for example, a Spanish Corned Beef company can bring as many tins of their corned beef to the UK as they want, because both Spain and the UK are in the European Union. 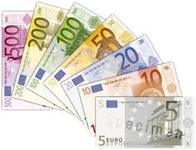 Countries in the European Union can, if they want, use the Euro. At the moment, 17 of the EU countries use the Euro as their main currency. The UK has chosen to stick with pounds and pence for the time being, but you never know in the future!

Using the Euro makes it easier for businesses that sell their products in other EU countries, as they don't have to work out the exchange rate all of the time. Businesses in the UK have to constantly try to work out how much they should charge for their products when they are selling them abroad. And also, if they buy materials from abroad, they have to convert everything back again. It's a proper pain!