Sometimes we might not agree with what the government do, or what a business does. For example, the government sometimes make laws that people don't always agree with. Or businesses sometimes decide to open up a shop where they are not wanted. Instead of people shouting on their own about it, they form a Pressure Group to get the government or business to change its mind.

Watch the video below to find out more.

Greenpeace are a massive Pressure Group with branches all around the world. They work hard to stop businesses and governments from destroying the environment. For example, an Oil company might decide to let waste oil just wash into the sea. If that happened, the oil might poison sealife, like fish and dolphins. Greenpeace make it their business to try to stop things like this happening. And if it does happen, they get the story onto the news so we become aware of what the oil company has done. That then might affect the oil company's sales and profits.

Amnesty International are another massive Pressure Group. They help to free people who have been put in prison for crimes that they didn't commit, especially political prisoners.

For example, in Burma, a country in Asia, a lady called 'Aung San Suu Kyi' was put in prison just for speaking out against the government. Amnesty International helped to get her released eventually by asking its members to write to the Burmese government asking for her to be released. They also made certain that people around the world found out about what had happened. 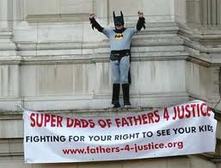 Fathers 4 Justice are a Pressure Group that put pressure on the government to give more rights to fathers who no longer live with their children. They believe that when a couple with children split up, the father should be allowed equal rights to see the child. They get annoyed when the mum gets custody and the dad only gets access rights. They write to the government asking for them to make things fairer.
The Business Framework